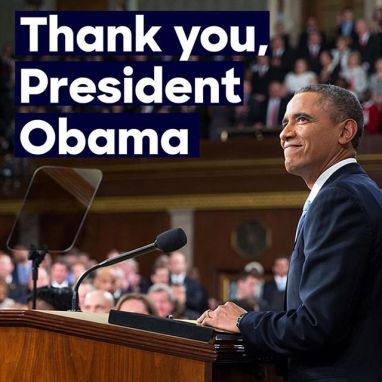 Thank you for showing us what class, humility and inclusiveness look like.
Thank you Mr. President. You will be missed more than words can express. 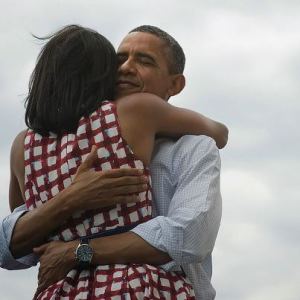 I wanted to send a personal thank you to American Voters for re-electing President Barack Obama.  But I have very specific reasons for which I wanted to say thanks.

I say thank you because although many of you voted for Mitt Romney, you did not elect a deluded, farcical, “cut between an Attila the Hun in global warmongering and Jack-the-Ripper in capitalist savagery,” as Hamid Dabashi, Al-Jazeera contributor and Professor of Iranian Studies and Comparative Literature at Columbia University calls him.  Mitt Romney would have bankrupted America and taken war to an already war-torn Syria.  To those of you unfamiliar with Syria and its regional politics, Syria is not Tunisia, it is not Libya and it is not Egypt.  It is uncomfortable ground; ground which needs protection and careful, decisive, well-planned and wisely executed action.

I say thank you because you didn’t elect a President who pays less in taxes than you do and less than you ever will because of the very same tax loopholes and expenditures he talked about shutting down.  You need to ask yourself what a presidential candidate really stands for when the taxes he pays amount to “chump change,” in financial rhetoric.  You have to ask yourself if your candidate really “gets it.”  It was clear from the get-go, that Romney didn’t.

I say thank you because you didn’t elect a President who couldn’t and who wouldn’t, though asked on countless occasions, specify an economic plan which would outline exactly how and through what means new jobs would be created, the deficit and government spending reduced.  If Romney was indeed a business man who could “solve problems” then this would have been a walk in the park for him.  Instead, he couldn’t answer the question.  In fact, time and again, he and Paul Ryan refused to specify their plan.

I say thank you because you didn’t elect a President who, for the last four years has been on a personal mission to make Barack Obama “a one-term President.”  To quote Bill Clinton, “it takes a lot of brass,” to accuse someone of non-bipartisanship when that someone has been hell-bent on precluding the President from doing his job.

I say thank you because you elected a President who gets it.  You elected a man who understands that the only way to get things done in Washington is through bipartisan cooperation even when that cooperation is short-lived or outright non-existent.   Historically, the issue of health care and insurance for every American has been a very sore point in American politics, but here you have a president who is looking at the much larger picture of ensuring that when workers are healthy and don’t have to worry about health coverage, those same workers are far more productive.

You elected a man who won an unprecedented and historical presidency.  To those of you on the far right of the political spectrum, I say this: it should never, ever come down to the melanin count to determine who has the right to become President.   So when every parent, of every race looks to his or her children, and says to them that they can become anything, it will hold true.

I say thank you because you elected a President who has much work to do.  Especially when it comes to closing, once and for all, Guantanamo Bay.  When America finally holds true to international law, to the Geneva Convention, the International Convention on the Rights of the Child and the International Human Rights Declaration then it will truly be an independent nation.  I say thank you because President Obama, and whoever comes after him, needs to learn that the unfettered access to prisoners of war, without being informed of their rights and to be detained indefinitely, without trial, has to end.  This President and all who follow him need to learn that people in Afghanistan and Iraq are not going to be grateful about having their countries taken over and taken to the brink of extinction just because an American President (GW) decided that their lives were “less than.”  President Obama needs to learn that praising Israel continuously and making the protection of the state of Israel America’s number one priority is not going to help achieve peace in the Middle East.  If America is indeed a sovereign nation, then there is no reason it needs to have Israel determine its foreign policy.  Obama has work to do in stopping drone attacks because he has no right to determine who lives or dies in nations and regions which have historically been problematic.  Drones solve nothing.  Let us hope that President Obama will get that.

I say thank you because America and the world need an economically viable and stable America. Were it not for the absolute failure of George W. to recognise that banks and financial institutions require regulation and were it not for the spending of $80 billion per annum on a war that no one wanted or needed, President Obama would not have inherited the economic mess that resulted in a near world-wide collapse.  You Republicans can go ahead and blame the President for this mess, but you really should hold your own accountable.  You elected a puppet who had no business being in the White House, let alone being Commander In-Chief and then you expect that President Obama can fix it in one term, with an undeniably resolute republican party blocking his every move!  That, my friends, is called impudence.

If Mitt Romney had won the election, all I would have written was this: Hide your money under your mattresses because that is the only place it will be safe.  Since we have witnessed a different turning of the proverbial tide,  I will say this:  for economic situations to rebalance themselves, there is a requirement to spend and save simultaneously.  Money is like blood flow—it needs to circulate in order to grow.  Without spending, there can be no saving and vice versa.  President Obama gets that.

You may ask why a Canadian cares so much about who is in the White House?  Because who you elect has a direct effect on my country’s relationship with your government.  Additionally, your government tells me how countries like Syria will be the recipients of dialogue and conversation rather than bombings.  People like me have friends and relatives all over the world and we want to know that the “leader of the free world,” will maintain dialogue and be thankful for the opportunity to do so.  Your country is deeply divided and has been for many years.  Perhaps if more of you were to do your homework, rather than relying on tub-thumpers like Sarah Palin, Michelle Bachman and Newt Gingrich, you would come to learn that you personally have work to do.  Being a citizen is not just going to the polls when there is something about which to vote.  You have a voice; you can choose to get educated and stop living on lies.  You can choose to have faith in your country.  People all over the world laugh at America and call you stupid.  That is because you make such a fuss over the middle name of a president when those very people who call you stupid are being shot, tortured and even killed just for dissenting against their own governments.  President Obama gets that.

I am beginning to believe that while President Obama still has a great deal to learn, there is almost nothing he cannot achieve.  He was right to run on Hope and Change in 2008.  America was in dire need of those two very indispensable commodities.  Indeed, so too was the world.

I say thank you because you elected a President Unprecedented.  Never before, in American history, has an African-American male been elected to the White House twice.

If Tupac could see this now….